As we begin the November market update by diving deep into last month’s statistics, we see that the market is continuing to normalize.  It has been a while since we had a normal market so let’s do a quick refresher course on what that means.

Here is a real world example: in Milton GA there were 197 homes sold in the last 6 months.  If you divide 197 by 6, the answer is 33.  There are currently 91 active listings in Milton, so you divide 91 by 33 and the answer is about 2.75.  SO, in Milton GA, there is currently 2 and three quarter months’ worth of inventory, meaning sellers are still at an advantage.

Why are we telling you this?  Because our job is to educate our clients!  Jason Lewris, Co-founder and Chief Data officer at Parci says, 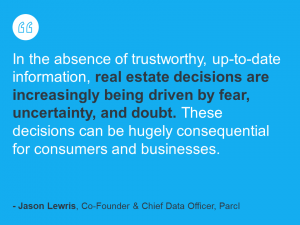 “In the absence of trustworthy, up-to-date information, real estate decisions are increasingly being driven by fear, uncertainty, and doubt. These decisions can be hugely consequential for consumers and businesses.”  Especially when a home is the largest single investment for so many!  We want our clients to be fully informed!

But finding reliable data is not easy.  The media feeds us a constant diet of fear because they are looking for clicks and ad revenue.  Here is an example.  Rick Sharga, Executive Vice President of Market Intelligence at ATTOM, one of the country’s leading providers of comprehensive real estate data said: 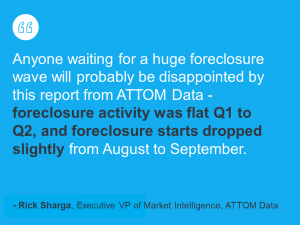 “Anyone waiting for a huge foreclosure wave will probably be disappointed by this report from Attom Data – foreclosure activity was flat Q1 to Q2, and foreclosure-starts dropped slightly from August to September.”

Doesn’t that sound like good news?  But look at the title of his report: 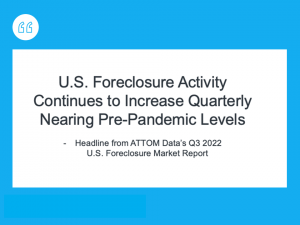 “US foreclosure activity continues to INCREASE quarterly, nearing pre-pandemic levels.“  While factually true, it is, at the very least, a misleading headline, one that you might read and feel justified in reporting to your friends that foreclosures are up, which might cause anyone thinking about buying a house to wait to see if a bunch of foreclosures flood the market creating a possible inventory glut and thus decrease prices.

But those are not the facts!  The facts are that foreclosures have been decreasing steadily since 2010.  Foreclosures SHOULD go up in 2022 because they were outlawed in 2020 and 2021!  We should expect to have some foreclosures.  But the numbers indicate that they are few and far between. 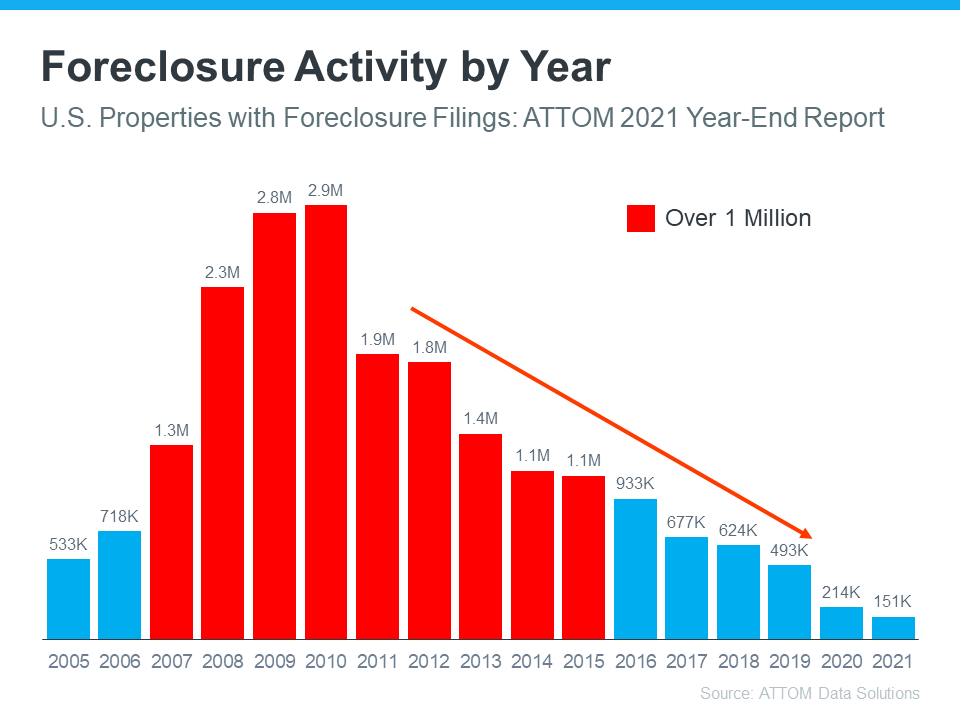 The point is that in order to make an informed decision about whether you want to buy or sell, you need facts, not propaganda.  So what ARE the facts?

The facts are that interest rates, inventory, and inflation/recession all impact the real estate market.  Setting aside the click bait fear mongering, let’s dive into these issues. 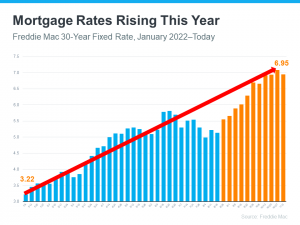 As you can see by this chart, mortgage rates have doubled this year.  This is the first time in history that has happened.  But Mark Fleming, Chief Economist at First American, recently said, 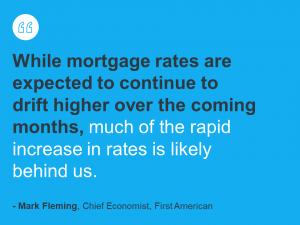 “While mortgage rates are expected to continue to drift higher over the coming months, much of the rapid increase in rates is likely behind us.”  Why?  Because the Fed is starting to see lagging indicators that inflation may be under control and they do not want to over-correct.  This may explain the most recent rate drops. 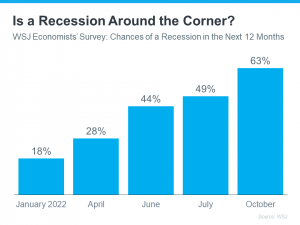 Then the question arises, is there a recession on the horizon?  The Wall Street Journal surveyed economists from January to October of this year and, as you can see from the chart, the number of economists who thought we were headed toward recession in January was only 18%.  By October, it was 63%!  Now what does THAT mean for the housing market? 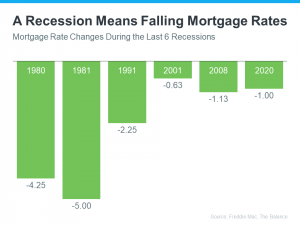 What recession should mean, based upon history, is that interest rates should fall.

Look at what happened to rates during those same 6 recessions.  This would be welcome news for buyers and sellers alike! 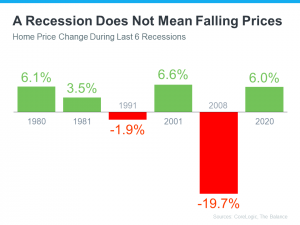 What it DOESN’T mean is falling prices.

Four out of the last 6 recessions experienced price INCREASES!  Of course, one of the two recessions where prices dropped was 2008 which was characterized by questionable lending standards and 18 PLUS months of inventory.  Neither of those are part of the current real estate market as we continue to enjoy tight lending standards and inventory remains low throughout the country and especially throughout the Top 7 North Atlanta suburbs.  But this chart also does NOT mean is that prices WON’T fall.  In fact, with the 20%+ price appreciation of the past two years, we SHOULD expect some price decreases!

What are experts saying about the overall future of housing prices?  Taylor Marr, Deputy Chief Economist with Redfin says, 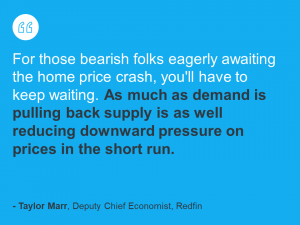 “For those bearish folks eagerly awaiting the home price crash, you’ll have to keep waiting. As much as demand is pulling back, supply is as well reducing downward pressure on prices in the short run.”  This is not a click-bait quote.  It is boring and well-reasoned!  And it is valuable information!  A slowing market is not a crash!  Staying outside of the market waiting for the perfect time to buy is not a wealth-building strategy.  It is more akin to playing the lottery.  Time in the market is better than timing the market! 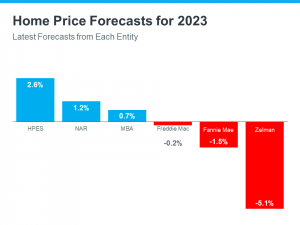 Some experts are predicting a slight uptick and some a slight downturn, as you can see by this chart.  When you average them all out, 2023 looks to be a year of flat home price appreciation.

Of course, these are national numbers.  Demand for housing in the Top 7 North Atlanta suburbs continues to be strong, especially in Alpharetta and Johns Creek where the average price increased last month by 8% and 5% respectively, even as the market is correcting.  Days on market remain low in all 7 suburbs. 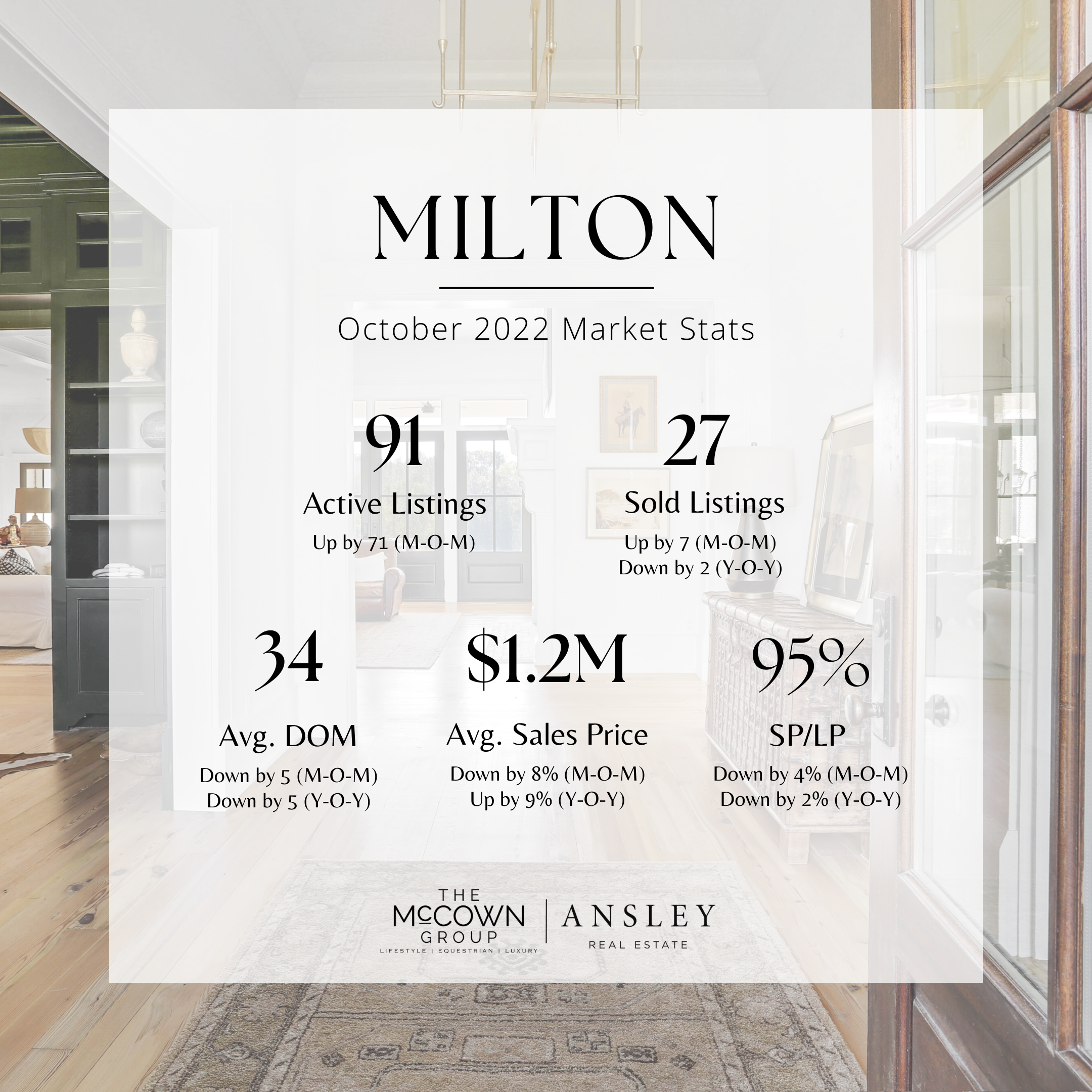 Let’s dive into those stats, starting with Milton.  Milton’s average price was $1.2 million, down from last month’s $1.3 million, while up from last year’s $1.1 million.  Days on Market were slightly less at 34 from last year’s 39.  Active listings at the beginning of November were over 4 times greater than last month:  91 compared to 20!  Considering that a third of those listing are new construction, it will be interesting to see if this increased supply will bring down prices in Milton this month.  We are already seeing signs that that may be the case as the sales price to list price ratio decreased from 99% in September to 95% in October. 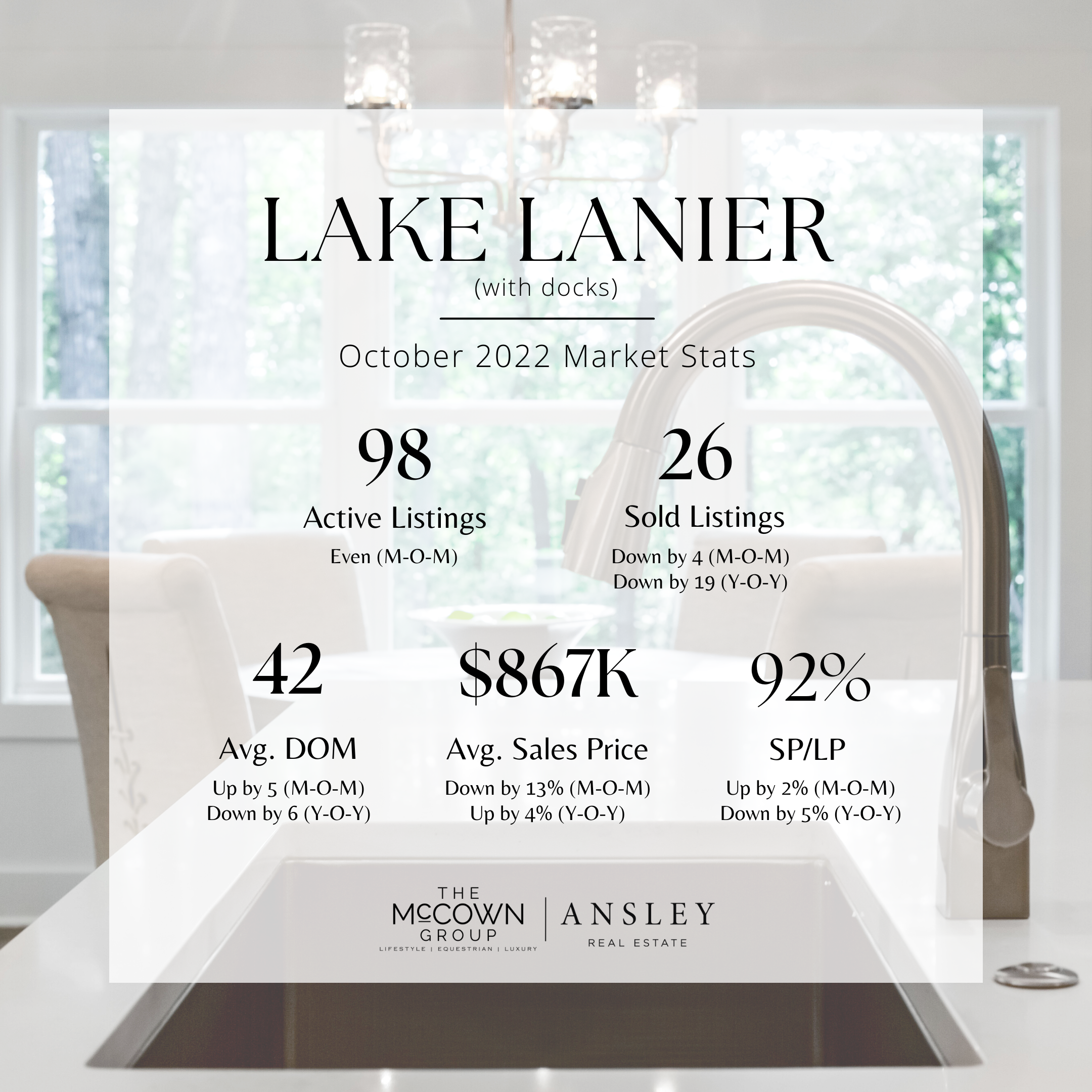 The average month-over-month price at Lake Lanier fell 13% to $867,000, however, that is still a year-over-year 4% increase.  This is a good sign of returning to normal.  As always, you will recall that these numbers only represent single family homes WITH docks.   26 homes were sold compared with 45 last October and we started the month of November with 98 actively listed, same as last month. 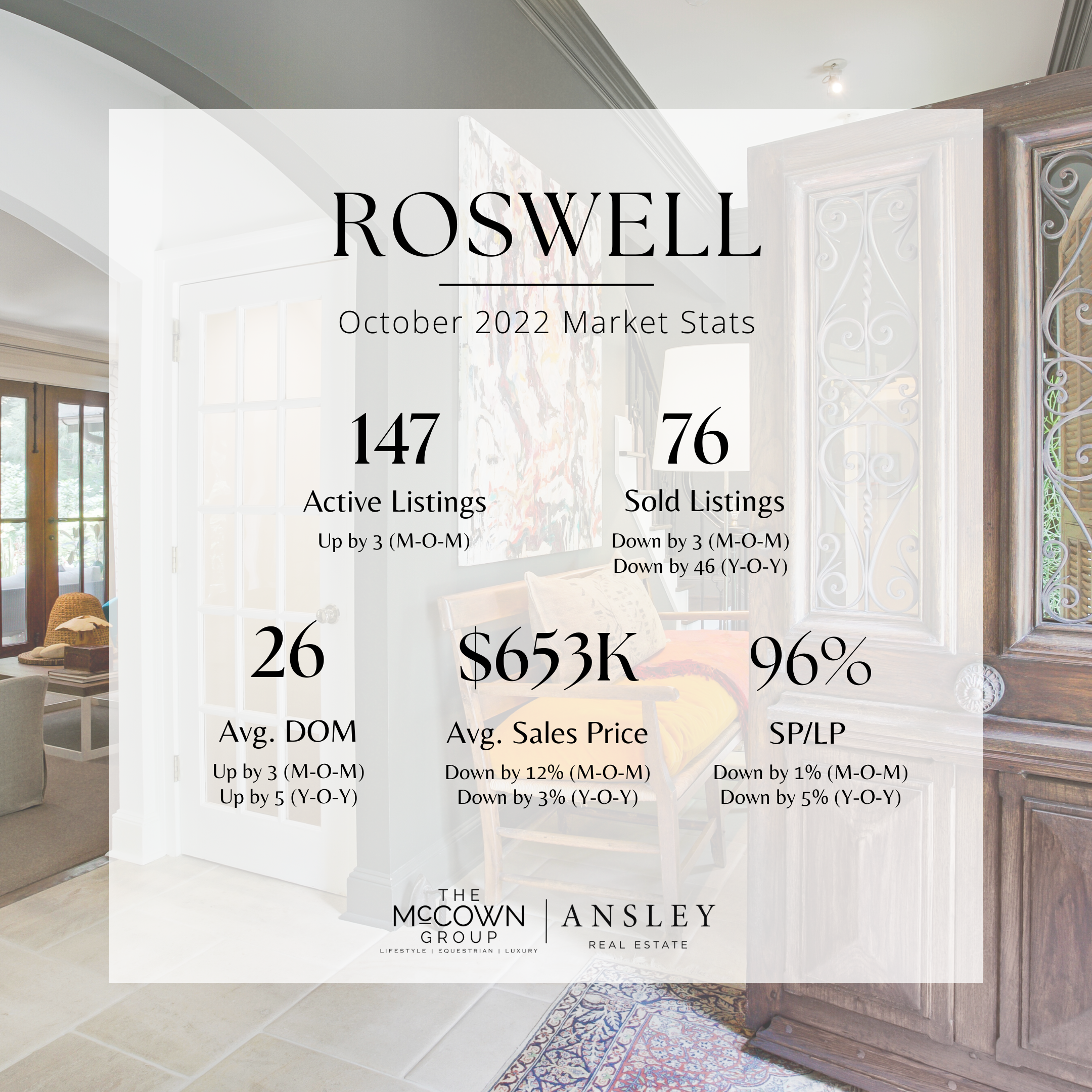 The average price of $653,000 in Roswell was down by 3% year-over-year and down by 12% month-over-month.  Active listings at the beginning of November were slightly up to 147 while sold price to list price ratios remained steady at 96% month-over-month compared to 101% in 2021. 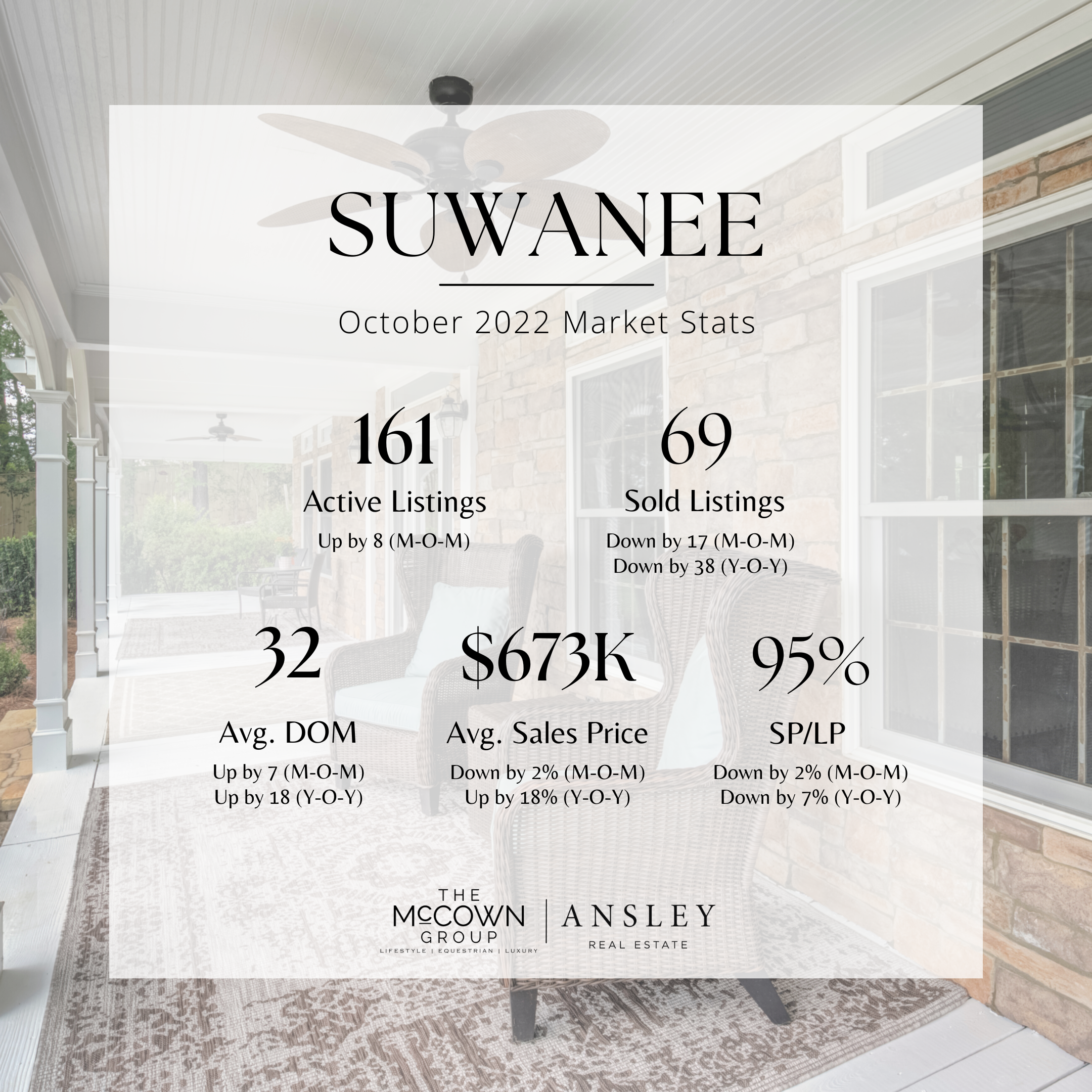 For the 69 houses that sold in Suwanee in October, month-over-month prices went down by 2% while year-over-year prices were up by 18% to $673,000.  Days on Market increased from 25 in September to 32 in October.  Houses sold for an average of 95% of list price as opposed to last year’s 102%.  November began with 8 more active listings than October for a total of 161, so supply is slightly up in Suwanee. 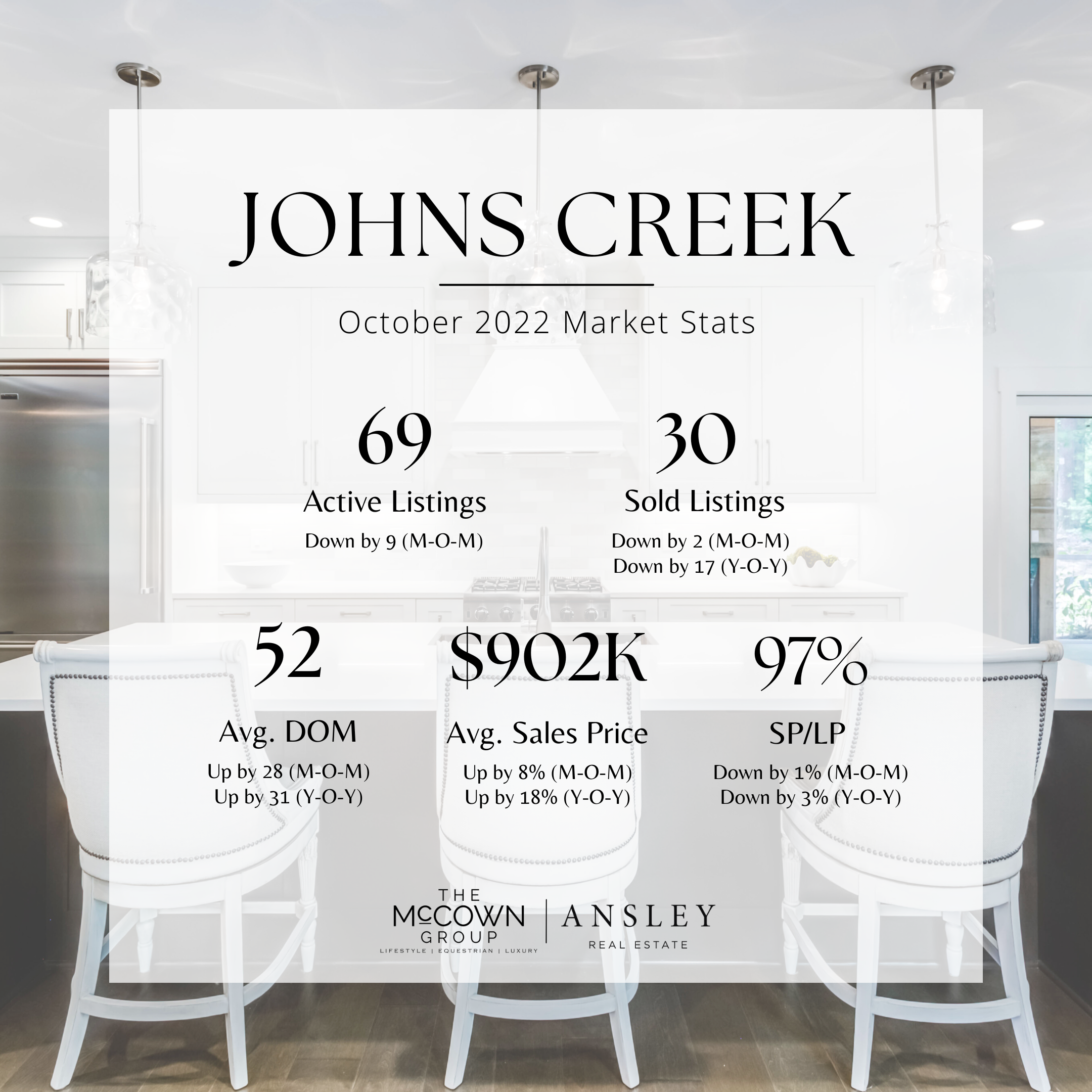 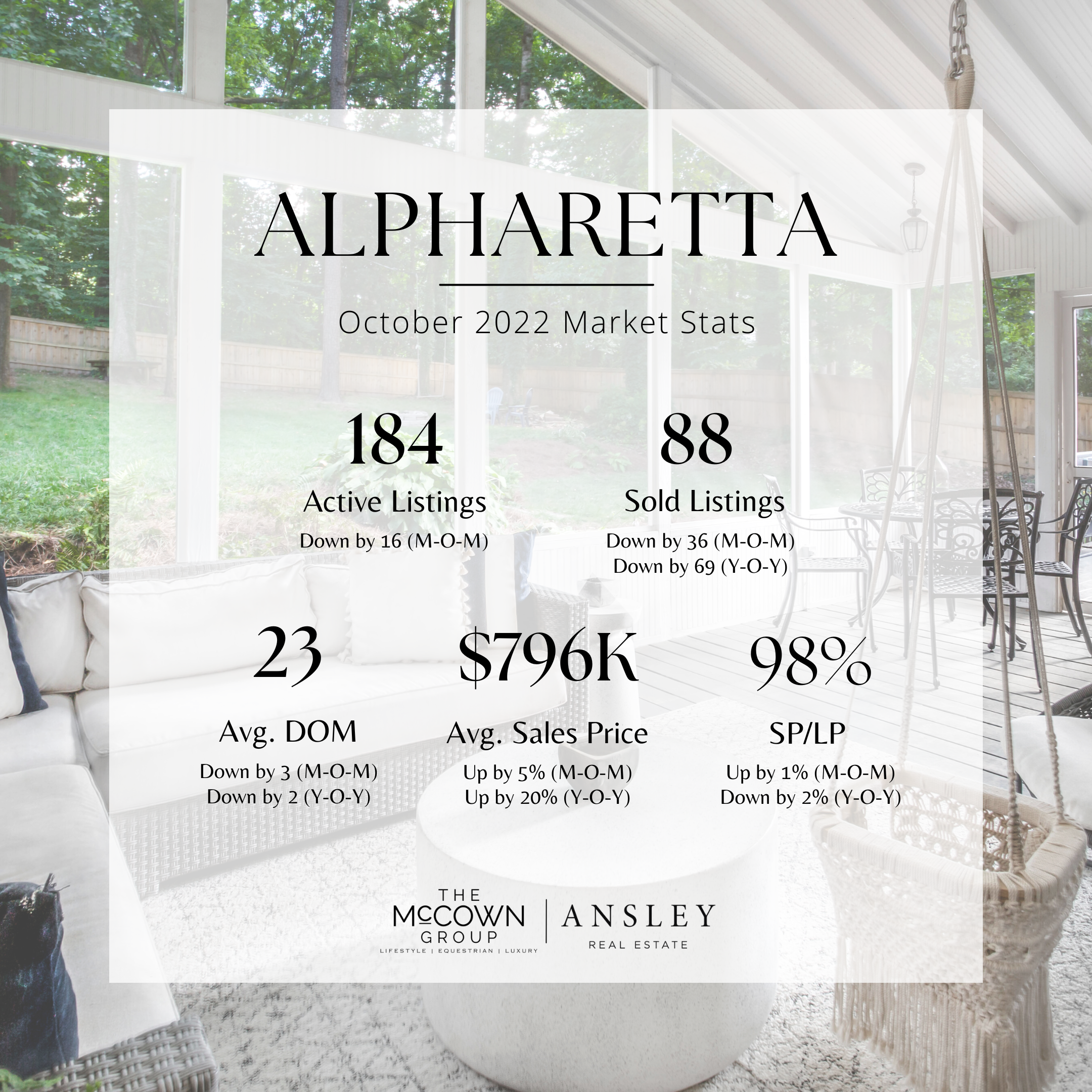 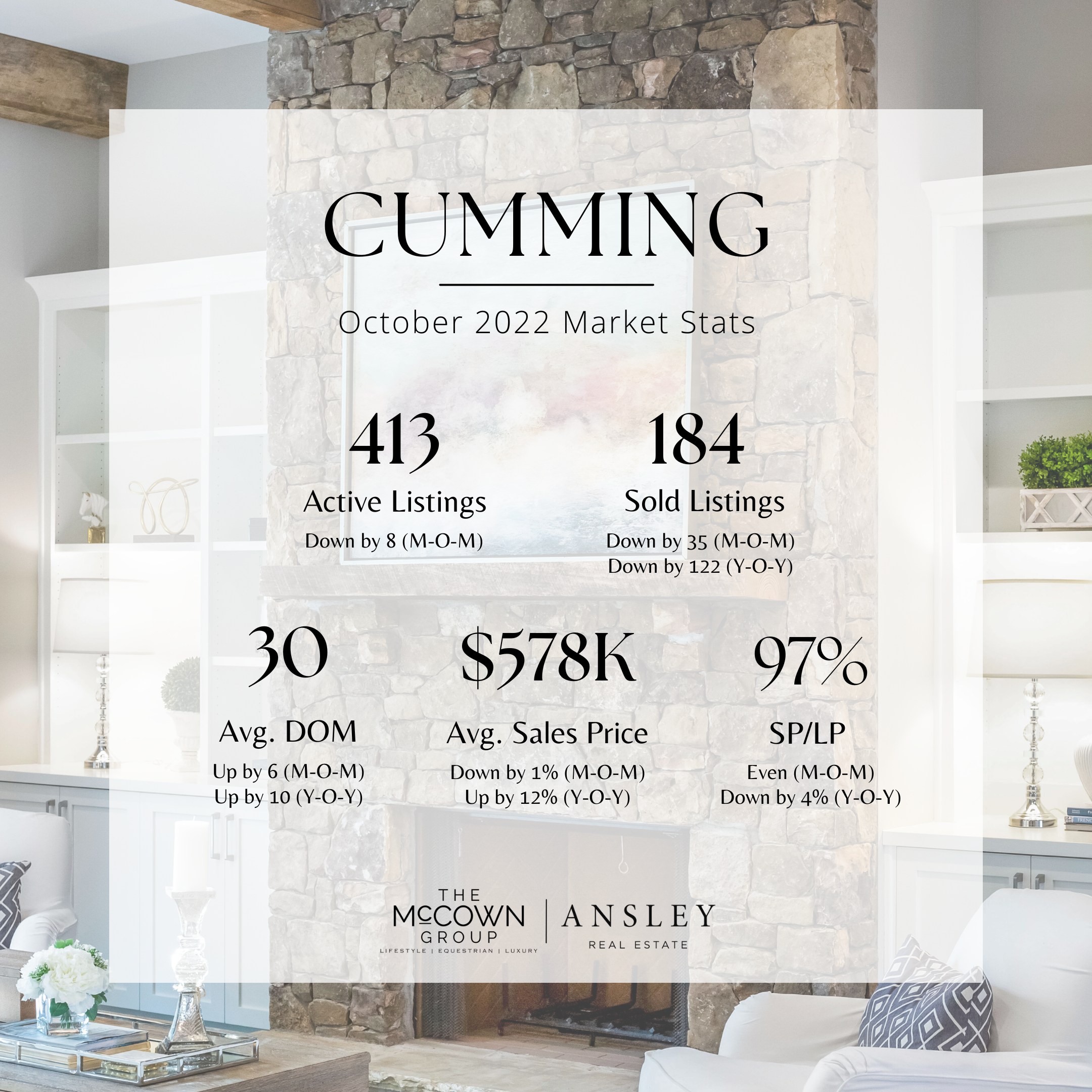 Atlanta is a thriving metropolitan area with a diverse economy and population.  It experiences all four seasons which allow for a great deal of outdoor activities and enjoyment.  These are all features that will continue to attract new , business and residents which will drive housing demand, especially in an age where one can choose where to live and work. 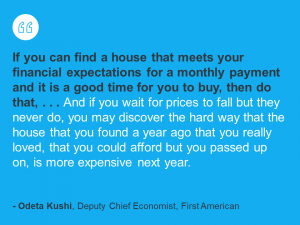 No matter what, do not miss out on buying a home you will love because of fear.  As Odetta Khushi, Deputy Chief Economist with First American says,

“If you can find a house that meets your financial expectations for a monthly payment and it is a good time for you to buy, then do that,… And if you wait for prices to fall but they never do, you may discover the hard way that the house that you found a year ago that you really loved, that you could afford but you passed up on, is more expensive next year.”

If you are thinking of buying or selling, don’t focus on the national headlines, but rather on the local data.  However, who you hire to sell your house matters more than ever!  You need an expert who knows the local market and can negotiate and navigate you through the chaos, advise you on staging, marketing and timing.

As always, you can find us on Facebook and Instagram at The Best of North Atlanta or visit our website at McCownGroup.com.  Of course, you can always call (or text) us at 678-807-9566.