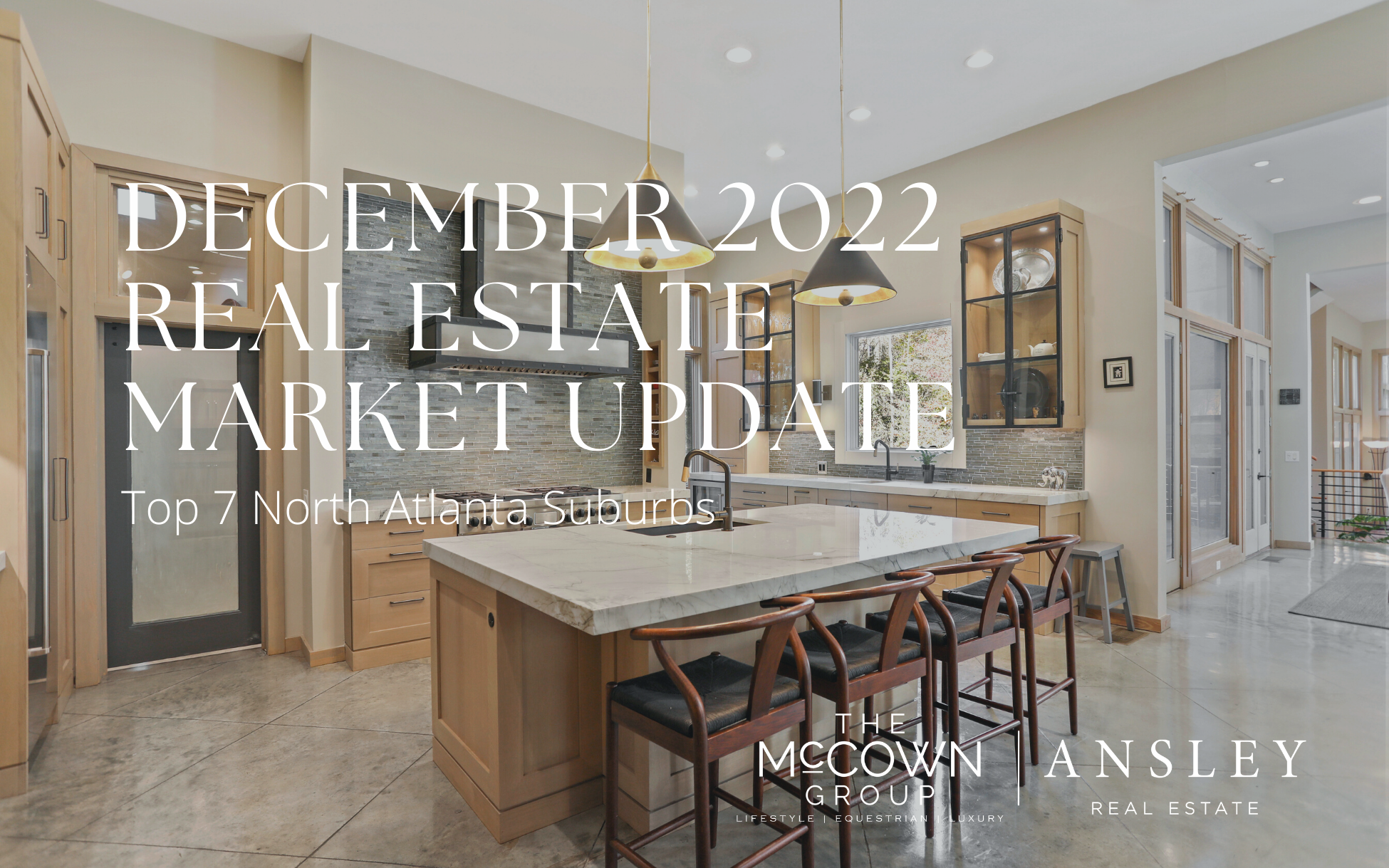 I cannot believe it is already December 2022. What a rollercoaster of a year it has been for the housing market. Why? Never in history have mortgage rates doubled in one year. It is not the rate itself that made the market unstable, but rather, the speed of the change. 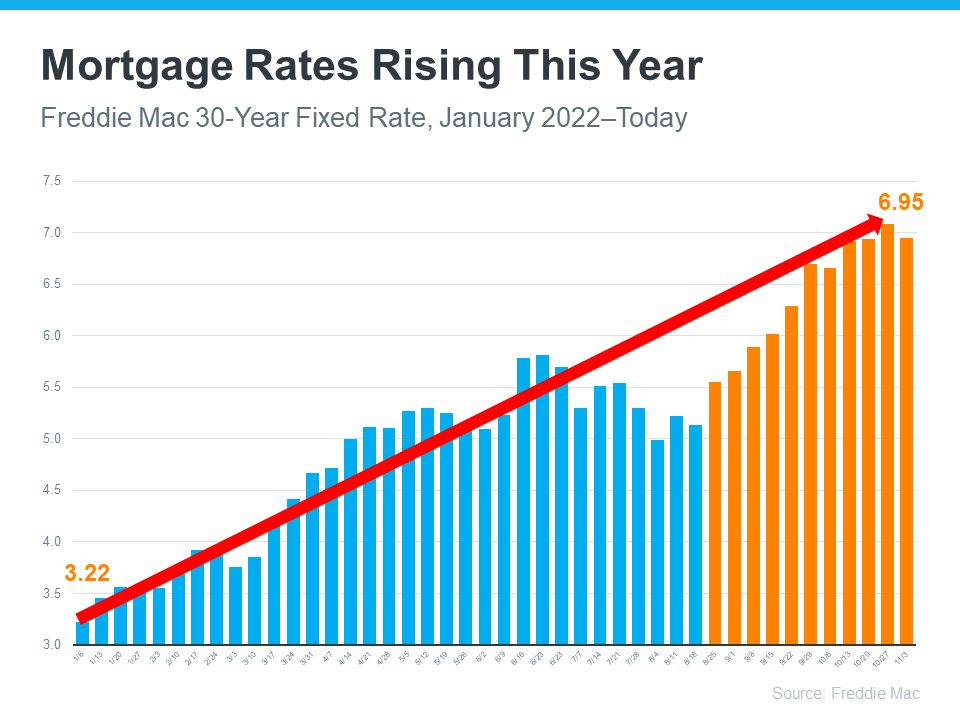 All markets are affected by psychology and humans are psychologically uncomfortable with swift changes. The natural reaction is to recoil and observe. And that’s exactly what has happened. The collective pool of buyers and sellers have circled the wagons and are waiting to see what happens. So what are you supposed to do? In uncertain times, we look to experts who live and breathe market data. In this market, we are particularly interested in experts’ opinions regarding inflation, interest rates, and housing values.

The Consumer Price Index published December 13th delivered very good news! Looks like inflation is under control and prices are trending downward. This is good for real estate. Perhaps that is why Patrick Bet David, in his YouTube interview with Tom Ferry and David Childers entitled, Perspectives on the 2023 Housing Market, qualified his opinions with this comment: “There isn’t anything long-term that concerns me about real estate, mortgages, insurance – nothing concerns me long term. But short term, it does.” There are statistics that look scary and dramatic in the short-term until you zoom out and view them in their historic long-term perspective. This applies to interest rates, inflation, home prices, and home sales volume.

Following Patrick Bet David’s lead, we will honestly discuss current market conditions, but we never want to forget that real estate is a long-term wealth-building tool. 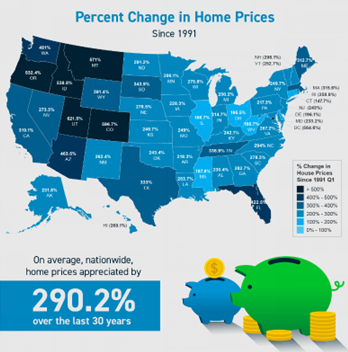 Over the last 30 years, home prices have increased 290.2%. Now with that in mind, let’s dig into what experts are forecasting for the next couple of years starting with interest rates. Will rates continue to rise?

Raoul Pal, CEO & Co-Founder of Real Vision Group & Global Macro Investor was asked about interest rates and had a surprising and emphatic answer: “Is the Central Bank raising interest rates? There’s almost a zero chance… because we’ve already got to the Tipping Point where inflation is starting to fall.” If Raoul is right, once interest rates stabilize, the rest of the economy will likely follow suit. As we sit here in December 2022, interest rates for 30-year fixed loans hover around 6.25%. The sky did not fall. The Fed has effectively brought inflation under control. This will have a settling effect on the housing market. Buyers and sellers will un-circle their wagons and feel more confident to get back into the market. 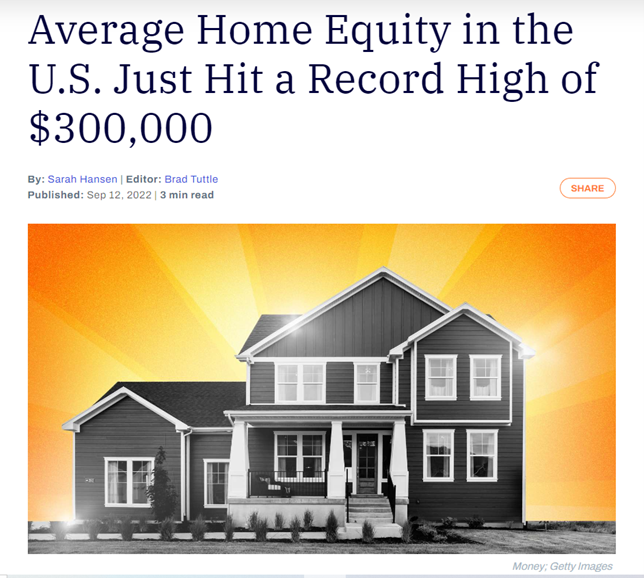 Then Chicken Little said, “But what if people lose their jobs and unemployment goes up? Then they won’t be able to pay their mortgages and foreclosures will skyrocket, right?” Not likely! This is a knee-jerk reflex brought on by painful memories of 2008. But unlike 2008, the average homeowner is sitting on $300,000 of equity. Three hundred thousand dollars!

Contrast that to 2008 when many homeowners owed more on their homes than they were worth. The equity that current homeowners enjoy provides a cushion between them and financial disaster and gives them time to cash out and figure out Plan B. 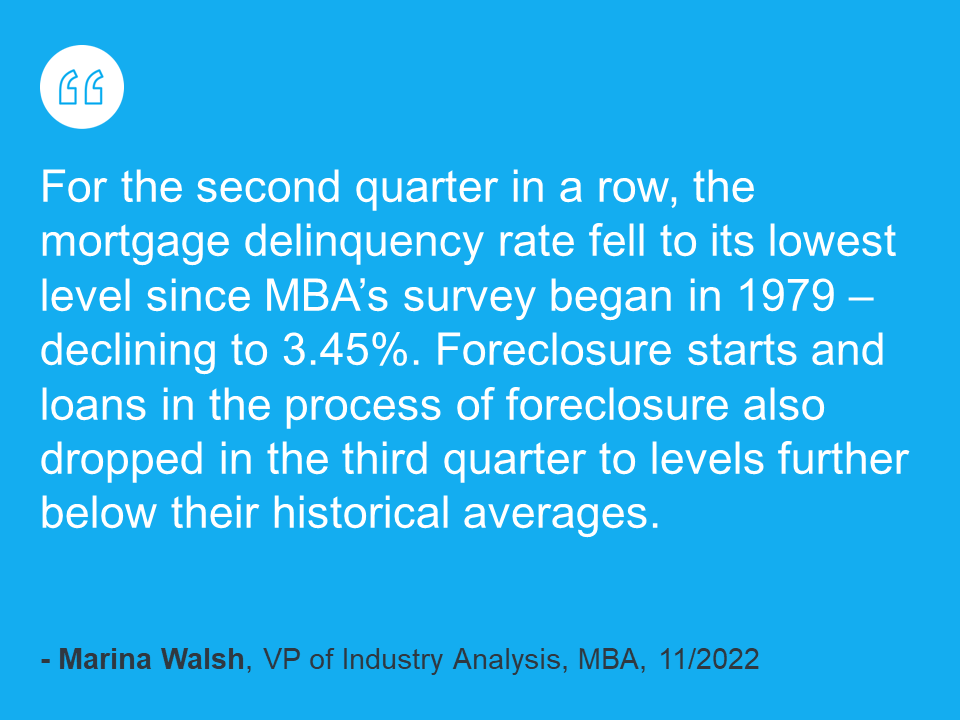 Want more assurance? Marina Walsh, VP of Industry Analysis with MBA says, “For the second quarter in a row, the mortgage delinquency rate fell to its lowest level since MBA’s survey began in 1979 – declining to 3.45%. Foreclosure starts and loans in the process of foreclosure also dropped in the third quarter to levels further below their historical averages.” 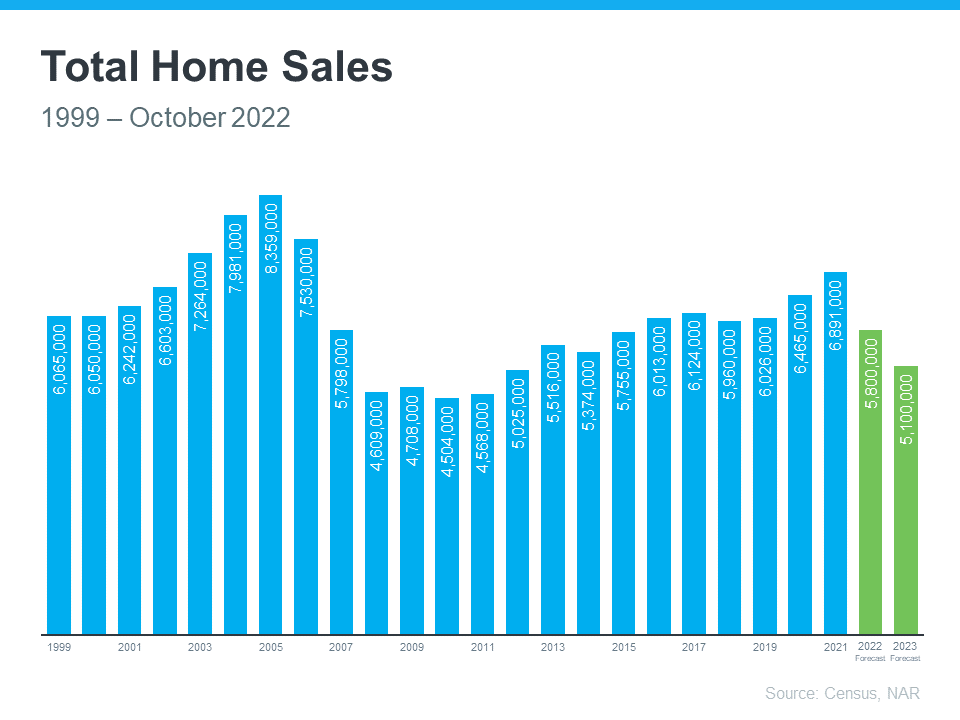 But these are national numbers. Chris Fuhrmeister, in his November 18th Atlanta Business Chronicle article entitled, Where Atlanta Housing Experts Expect Prices to Grow in 2023 and Beyond, said, “Atlanta is not alone in its housing slowdown and many economists expect the trend to continue across the U.S. in 2023. Prices are already declining on an annual basis in expensive West Coast markets. But the dip might not be as deep in Atlanta.”

Chad Plunkett, Division President with PulteGroup Inc. added that, “Metro Atlanta has a regional advantage compared to other parts of the U.S.” and, “I would think that the Southeast is going to outperform the rest of the country.”

We agree! All seven suburbs have decreased month-over-month supply but greatly increased year-over-year supply. This is inconsistent with the national forecasts of decreased volume for 2023. We will have to wait to see, but so far, December’s numbers in the Top 7 North Atlanta Suburbs are outperforming the national experts. And now is a good time to dive into those numbers starting with Milton. 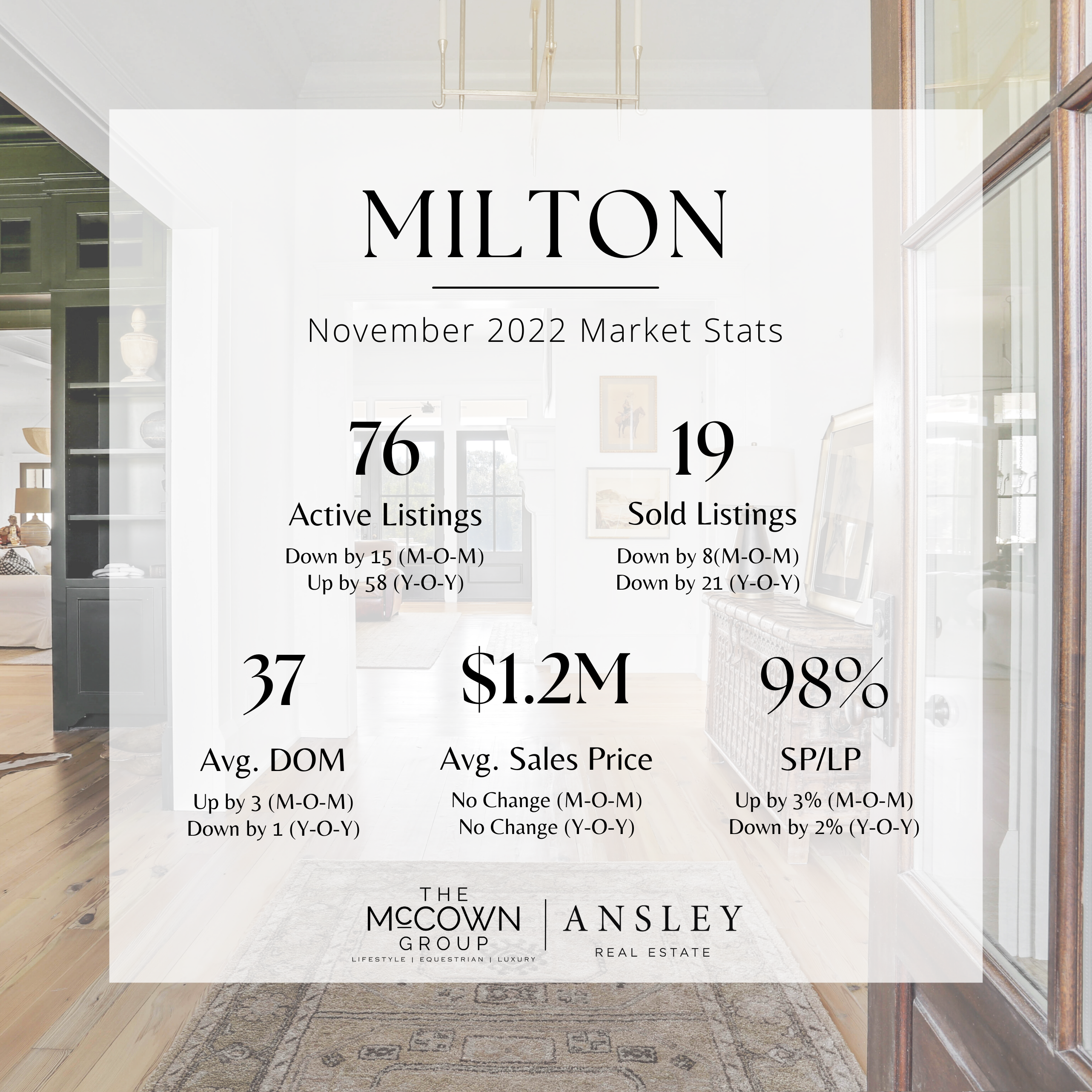 Milton’s average price remained steady at $1.2 million dollars, exactly the same as last month and last year. Days on Market were 37, also about the same as last month and last year. Active listings at the beginning of December were down from November by 15 to 76. However, this is a sharp increase compared the paltry 18 active listings of 2021. Last month we wondered if the increase in supply of new construction housing would bring down prices in Milton. It did not! In fact, buyers paid 95% of list price in October compared to 98% in November. Demand in Milton remains strong. 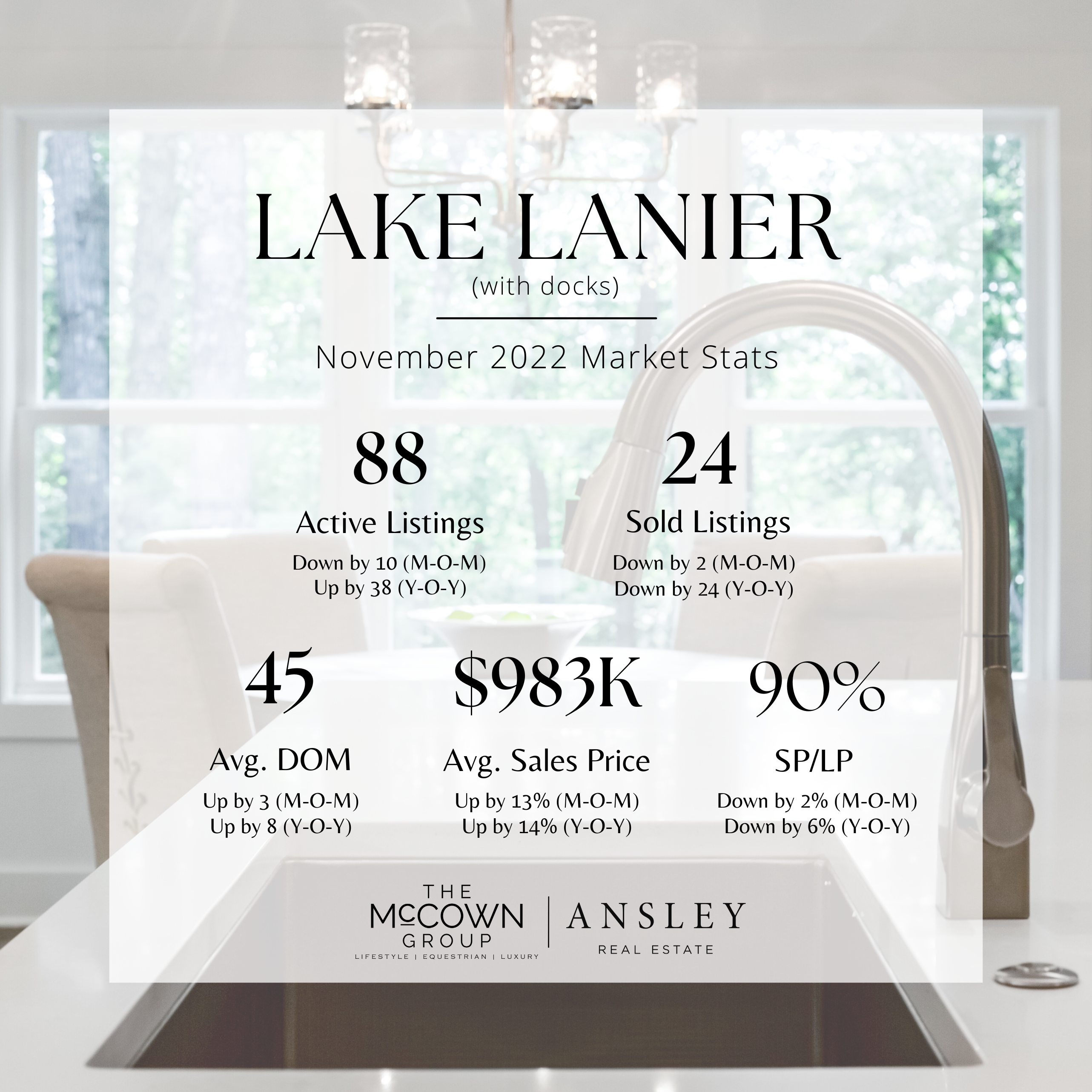 The average price at Lake Lanier was up by 13% month-over-month and 14% year-over-year to $983,000 for the 24 homes that were sold. That is about the same number of homes that sold last month, but only half the number that sold last year. December began with 88 active listings, 10 fewer than last month, but 38 greater than last year. Again, the year-over-year supply shows a large increase. Still, sellers at Lake Lanier are pricing too high as their sales price to list price ratio was around 90%. 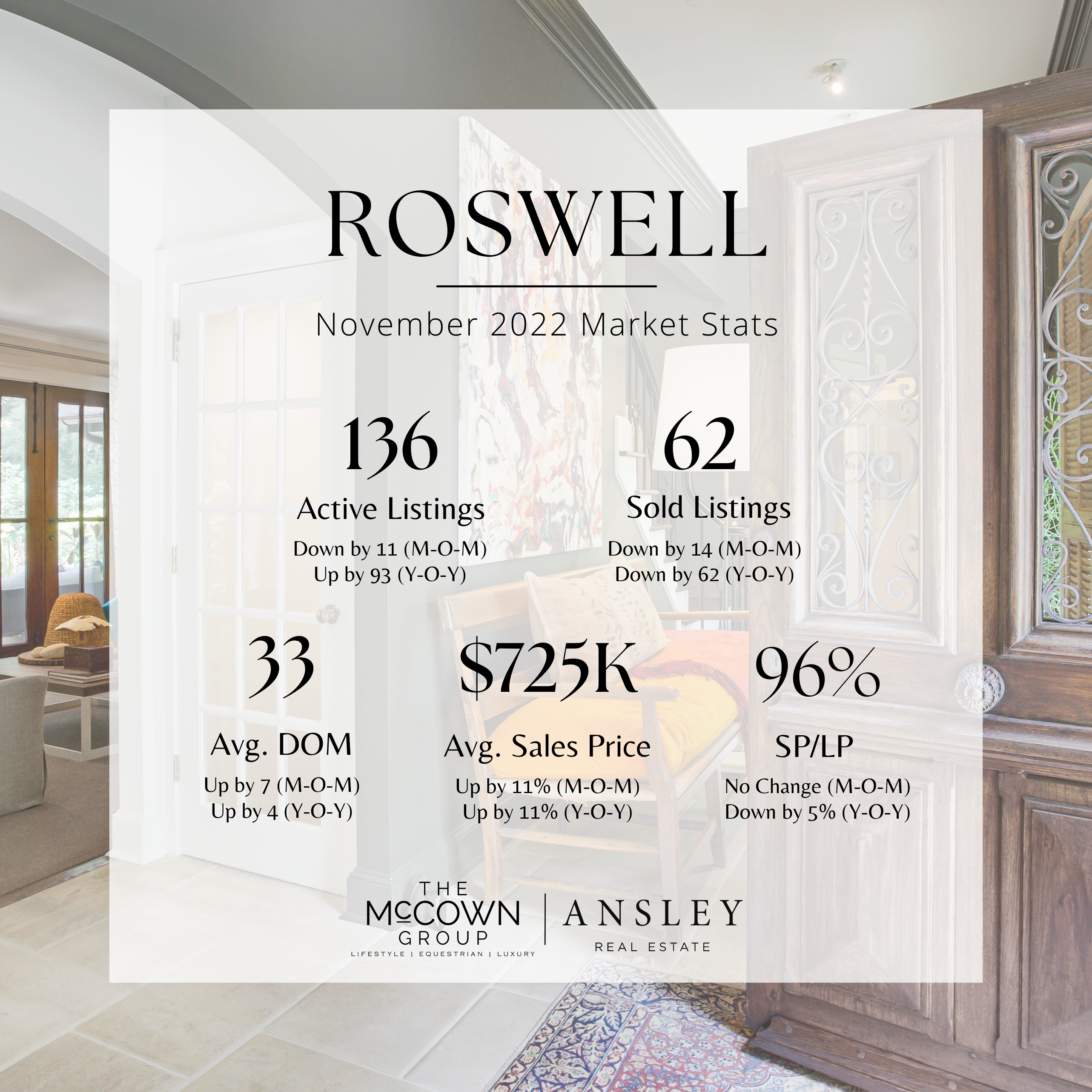 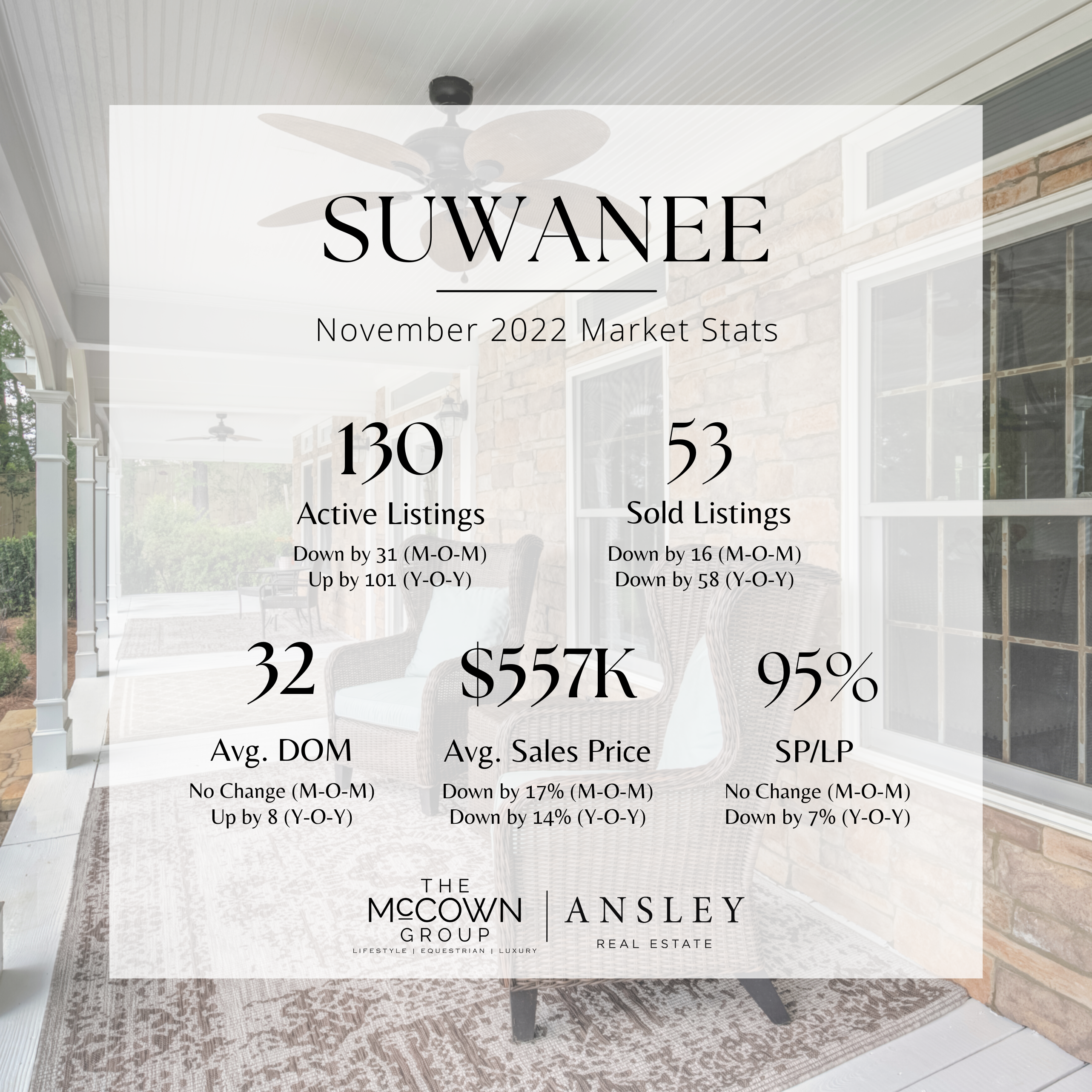 For the 53 houses that sold in Suwanee in November, the average price decreased from $673,000 in October to $557,000 in November, a 17% decrease. Days on Market remained the same at 32. Houses sold for an average of 95% of list price, the same as last month. However, the sales-price-to-list-price ratio last year was 102%. December began with 130 active listings, 31 fewer than November, but 101 greater than last year. 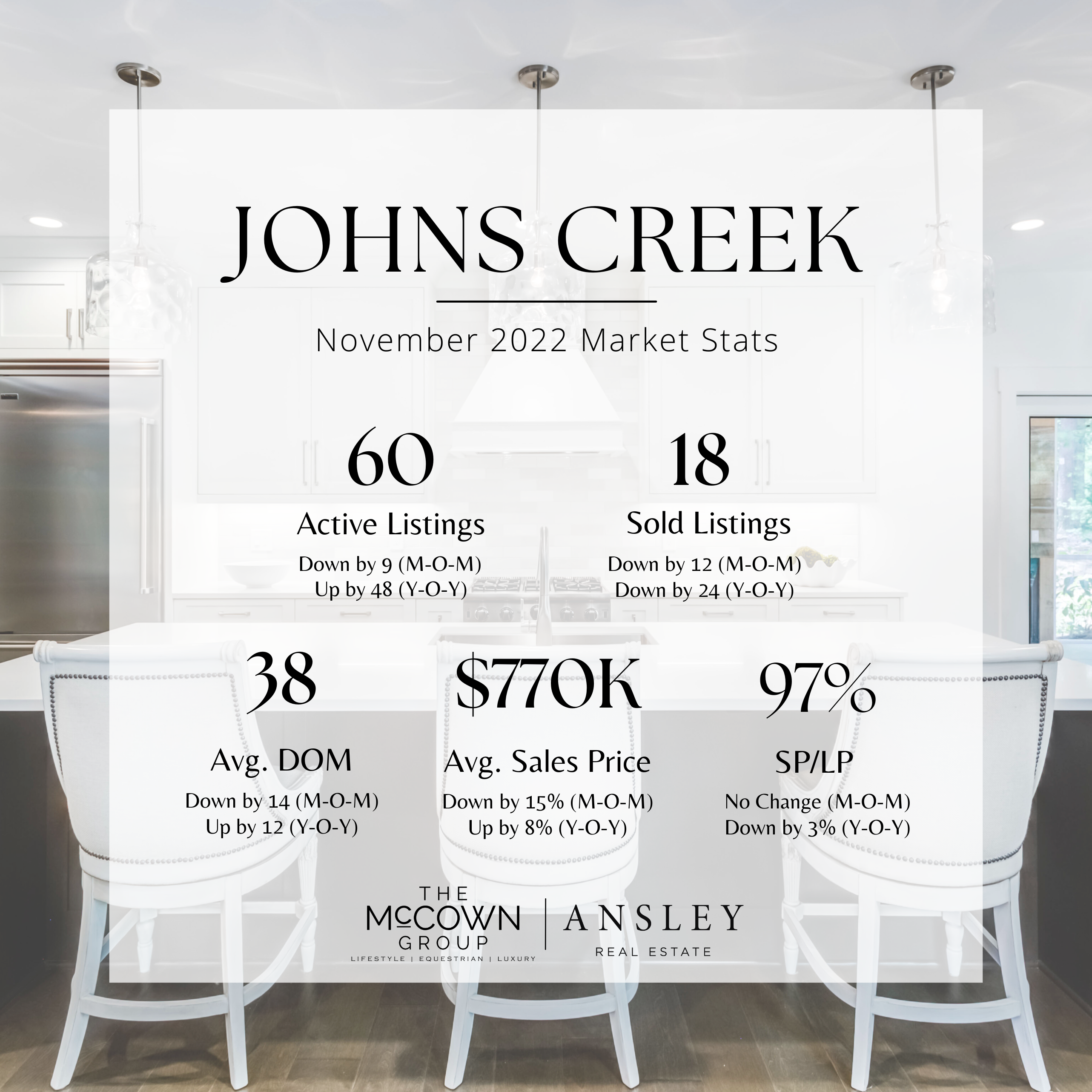 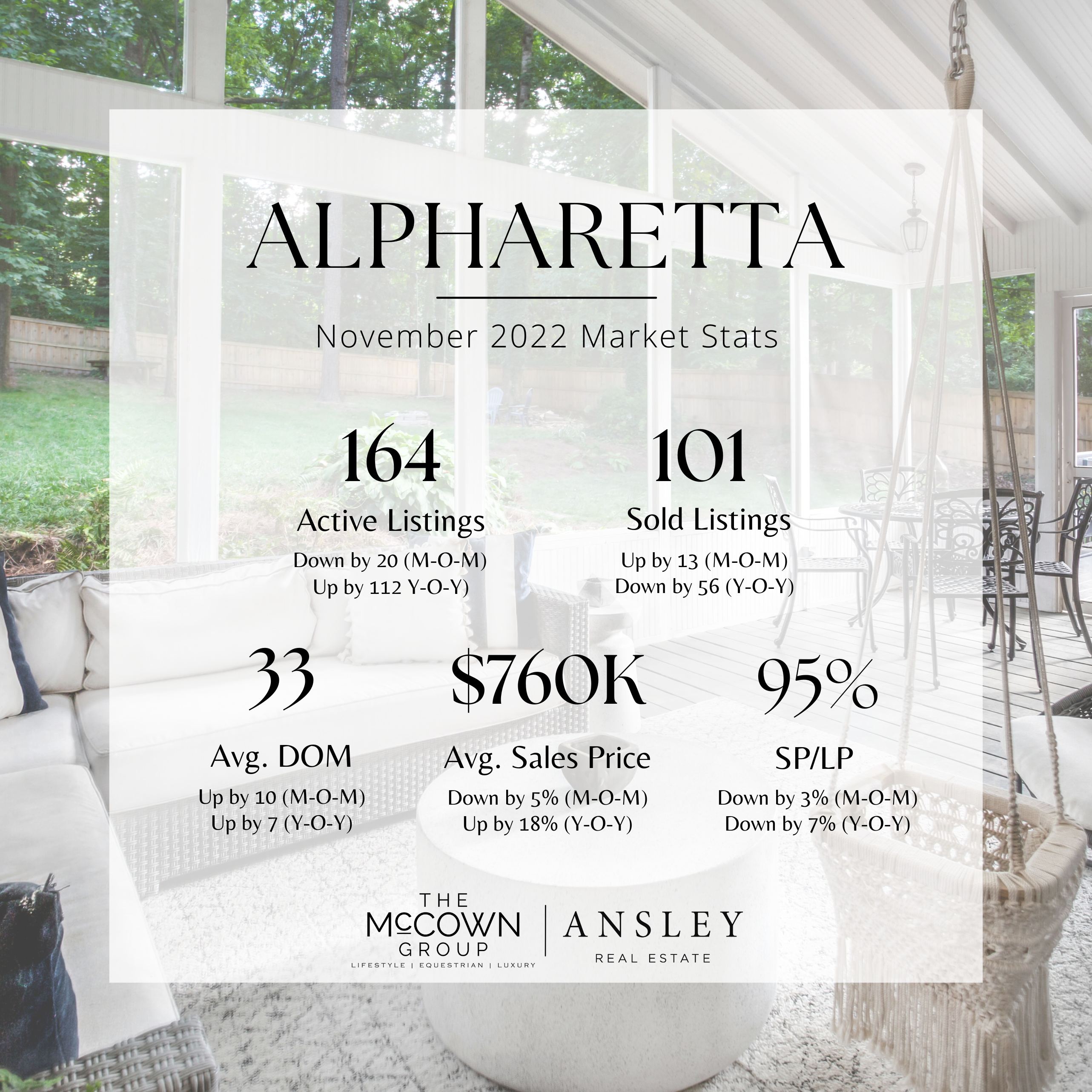 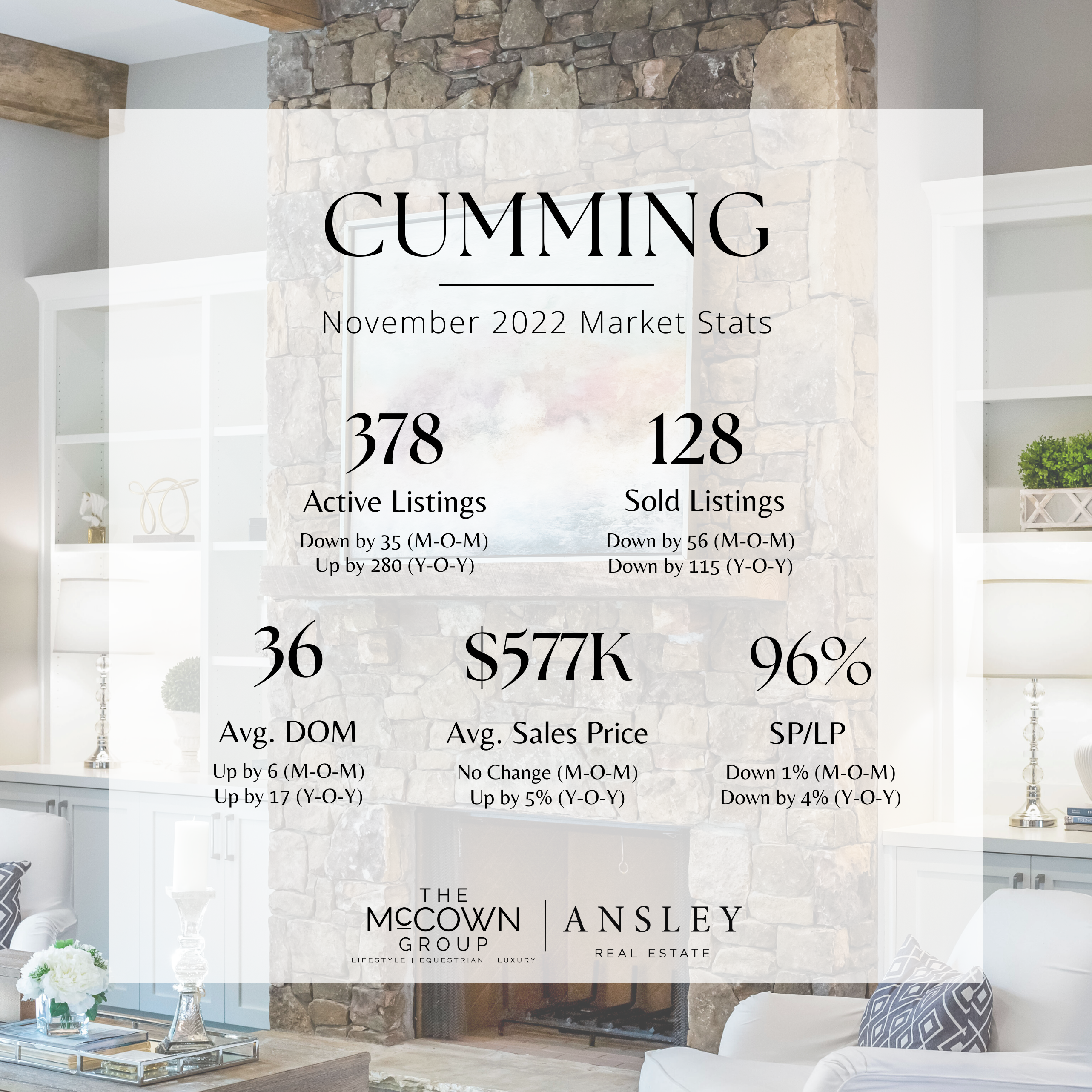 These are the hard cold numbers. We do not live in Detroit or California. We live in thriving North Atlanta! It is a slowing market, not a crashing market. It’s back to normal.

If you are ready to buy in this normalizing market, give us a call so we can sit down and discuss your particular situation. We can save you time, money, and headaches. Plus, we have a lender that offers free refinancing in the first three years of your mortgage, a great opportunity in today’s market.

If you are thinking of selling in this normalizing market, don’t focus on the national headlines or the market of four months ago, but rather on the most recent local data. Most importantly, who you hire to sell your house matters more than ever! You need an expert who knows the local market and can navigate you through the chaos, advise you on staging, marketing and timing. Oh wait! That’s us!!

We look forward to speaking with you soon!  In the meantime, be sure to subscribe to our YouTube Channel for more North Atlanta Market Updates!