As we sit here in early September discussing the August real estate market in the Top 7 North Atlanta Suburbs, there are three major variables: interest rates, home price appreciation, and affordability. Let’s start with interest rates. Keeping Current Matters says that quote, “Inflation is the enemy of long-term interest rates.” So when the September Consumer Price Index or CPA came out at .1%, bringing up the 12-month unadjusted inflation rate to 8.3%, some economists speculated whether the FED might raise rates by 100 points. Let’s take a look at interest rates from the beginning of 2022 until now. 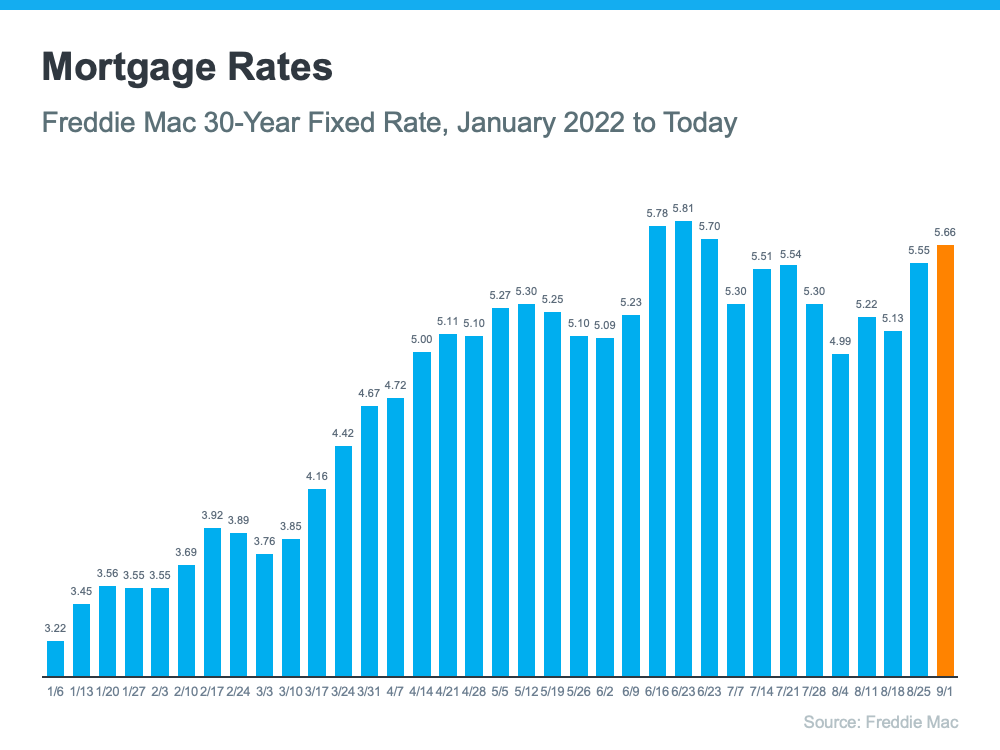 You can see that there has been a gradual increase from January to June, and then you see the volatility caused by inflation. And we are going to have inflation as long as the government continues to print money at will. But as we have discussed before, Homeownership is a hedge against inflation and has been all the way back to the 1970s. Remember the 70s?? I don’t. But some say they want to wait to buy a home until prices fall and then swoop in and buy when the market is low. This is risky! Even experts are not able to time the market perfectly. In fact,

“Would-be homebuyers who have decided to wait for mortgage rates to fall so they can afford to leap back into the market should realize that waiting isn’t going to help — they would just be swapping their too-expensive financing problem for a bidding-war pricing problem as the number of houses for sale shrinks. The best hope for homebuyers now might be to just go ahead and accept the higher mortgage rates and hope to refinance later.”

Time IN the market is better than timing the market! There is just as much risk in waiting to buy as there is in buying now. No one knows the future. One of the ways we can try to make sense of the economic factors that affect interest rates is to turn to the experts. 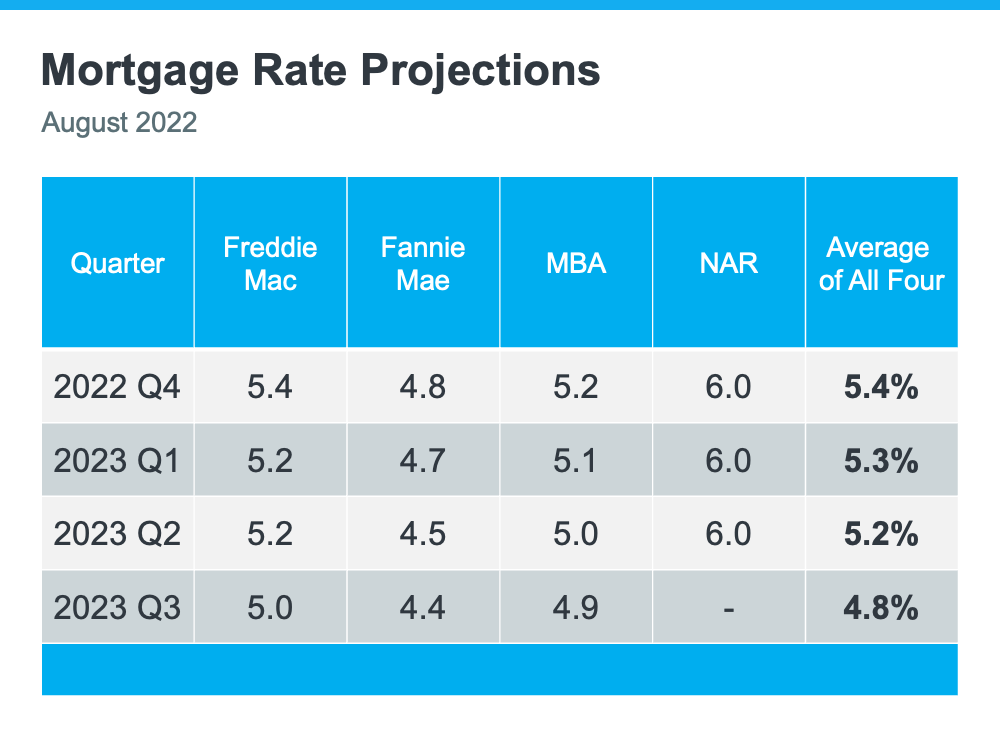 In this table, you can see four major experts in the mortgage space predicting interest rates in the next four quarters. And what we see is interest rates leveling out mid-2023. The average of these predictions puts us in the low to mid fives next year and that would provide some predictability for buyers and sellers alike. The next topic is home price appreciation. Let’s break it down.

Home price appreciation is still expected, especially in the North Atlanta Suburbs where demand continues to remain strong. However, the rate of appreciation HAS slowed. What we are seeing is deceleration, not depreciation. However, it gets confusing for homeowners who could have priced their home at $700 thousand dollars 3 months ago, but now must price at $650 thousand. That may seem like depreciation, but depreciation is calculated year-over-year, not month-over-month. So when we say that Metro Atlanta’s average price of $455,000 shows a 15% increase over last year, that still includes a couple of recent months of price decreases, but not overall year-over-year depreciation. 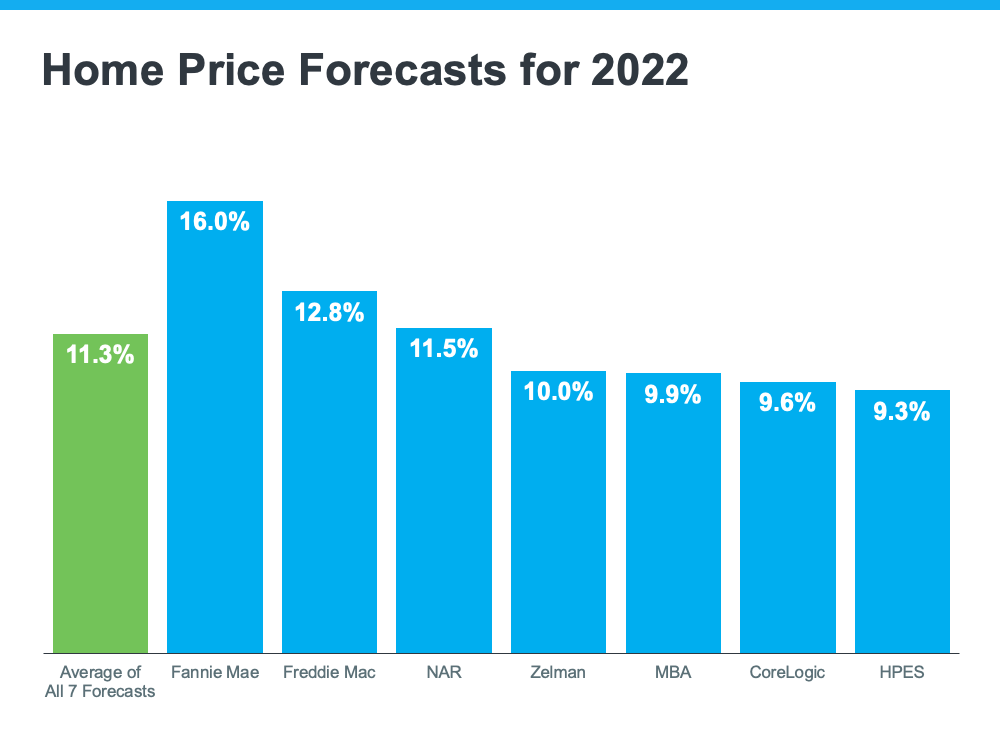 Still, As you can see by this graphic, experts still have high expectations for home prices for the remainder of 2022. What do you think will happen? Let us know in the comments.

Lastly, let’s take a look at this affordability index. 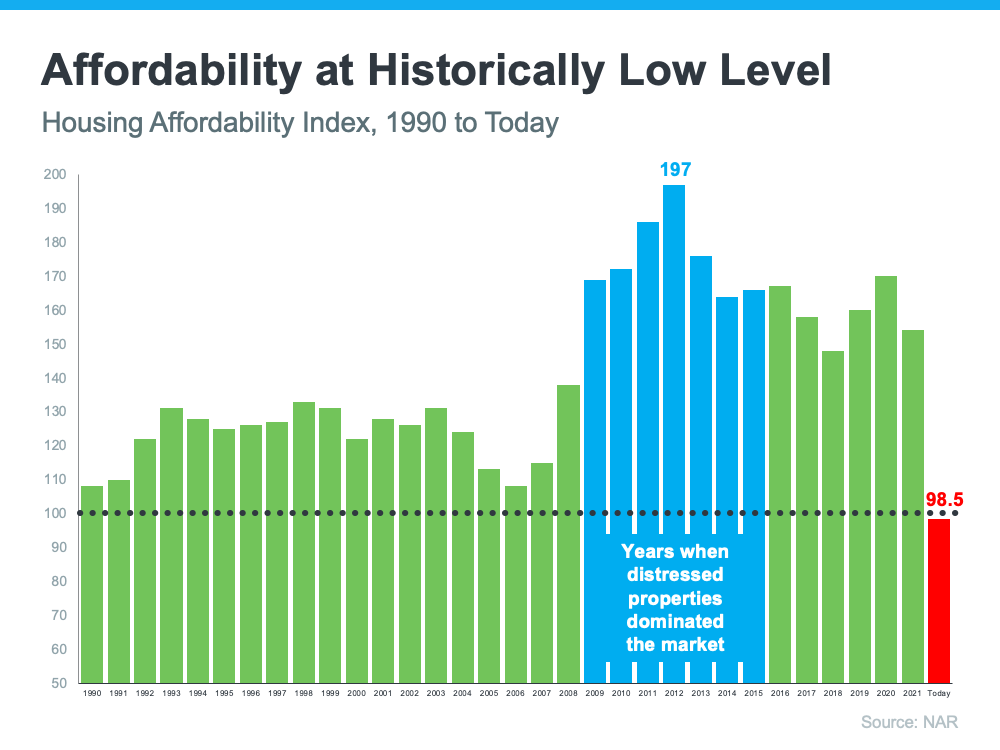 The way you read this is the higher the bar, the more affordable housing is. And you can see we are at an all-time low with that red bar. The dotted line across the middle shows where an even market is right at 100 meaning that 100% of average households in this country can afford 100% of the average mortgage payments. In the last few years, low interest rates have made housing very affordable. Right now, the average household can only afford 98% of the average mortgage payment. The affordability algorithm is calculated using home prices, interest rates, and wages. We have seen that home prices are coming down while interest rates are rising. That combination has caused an average increase in mortgage payments from $1,265 dollars to $1,944 dollars in the last year. This has pushed up the percentage of income homeowners must spend on mortgage payments. Lower interest rates in the past have provided much freedom of spending as homeowners were able to spend a smaller portion of their income on shelter.

As prices and interest rates have risen, you can see that the recent percentage of income paid for shelter is just above 25%, which is close to the maximum allowed by lenders. This brings us to qualifying income required by lenders which, as you can see, is different across the country. 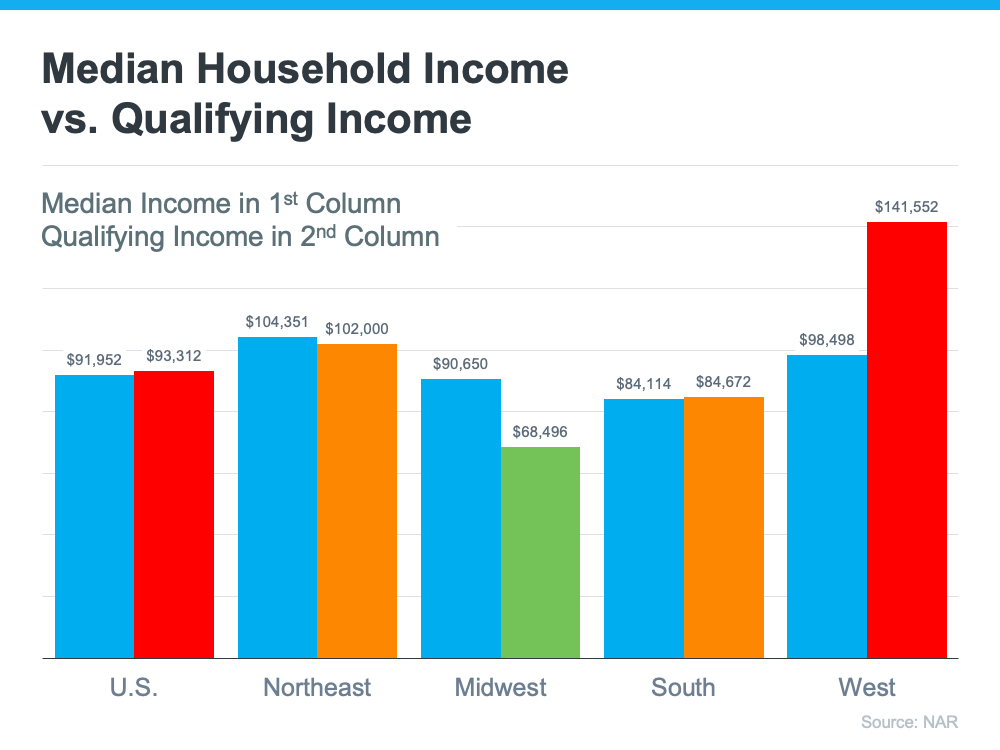 Homeownership in the west is difficult since the median income is around $98 thousand dollars while the qualifying income needed to secure a mortgage is $149 thousand. But we are not in the west. We are in the south where the numbers align much better. More specifically, the median income in Georgia is $83,200 dollars so mortgages in our area will remain affordable and available. I don’t know about you, but this makes me happy I live in North Georgia!

Now that we have seen how the overall market is returning to normal, let’s dive into our micro-markets. What happened in August 2022? All of the Top 7 North Atlanta Suburbs experienced longer Days on Market in August compared to July and started September with fewer active listings than August. In Metro Atlanta, inventory is up year-over-year!

But every single Top 7 Suburb shows decreased month-over-month inventory. For buyers in these areas, there were national and local factors at work. Of course, the two national issues were interest rates and the economy in general. But the local issue was school starting. It is a big adjustment to a family’s schedule to enter into a new schedule every fall, so other unnecessary activities come to a screeching halt… activities like home shopping! This lull in the real estate market happens every year. 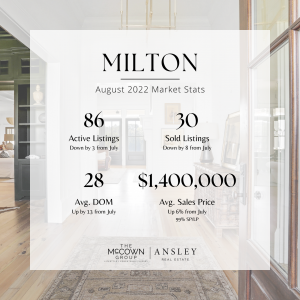 So as we start with Milton, you will see that Milton’s Days on Market went from 15 to 28 in August. The average price in Milton increased 6% from $1.28 million in July to $1.4 million in August.  And the price of the 30 homes that were sold were on average 99% of list price, compared to 101% in July. The month of September began with 86 active listings which is nearly the same as August. If 30 homes are sold in a month and there are 86 active listings, that equates to about a 3-month supply of inventory. Six months is considered a balanced market. But as the market normalizes, Days on Market will likely increase and prices month-over-month, will likely decrease.

The month-over-month average price in the Lake Lanier housing market was up 11% from $904 thousand in July to $1 million in August. Now, just a reminder – these numbers only represent homes WITH docks. August was a busy month at Lake Lanier, increasing July’s activity by 68%, from 25 sold homes to 42. However, the 92% sales price to list price ratio indicates that sellers were slower to hear the message of the shifting market than were buyers. The increase in Days on Market from 29 in July to 41 in August is yet another hint of that same truth. Many sellers who put their houses on the market in July overpriced them based on the explosive market of the previous 6 months only to find that the market had normalized, although 42 Days on Market is still not “normal” for an area generally made up of secondary or vacation homes. As we head into fall, we expect to see all the market indicators at Lake Lanier normalize. 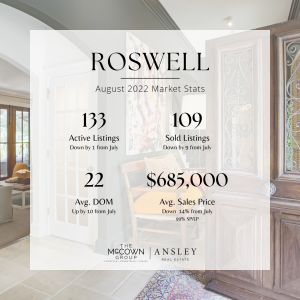 In Roswell, the month-over-month price went down by 14% from $794 thousand dollars to $685 thousand. Buyers paid 99% of list price, down slightly from last month’s 101%. Days on Market went from 12 to 22. With 133 active listings at the beginning of September compared with 134 active listings at the beginning of August combined with the normally slower market that every fall season brings, Roswell will remain a competitive, but slower market for the remainder of 2022.

For the 105 houses that sold in Suwanee in August, prices went up 7%, from $677 thousand in July to $724 thousand in August. Days on Market went from 10 to 27. Houses sold for an average of 97% of list price as opposed to last month’s 101%. September began with 17 fewer active listings than August so it will be interesting to see if Suwanee’s market slows in September or holds its own as we head into the fall. 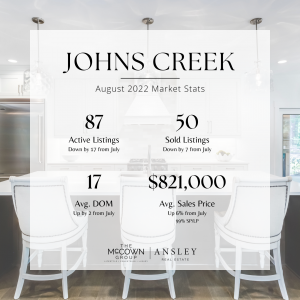 In Johns Creek, the average price was up by 6% from $773 thousand in July to $821 thousand in August. The 50 homes that sold maintained a sold price to list price ratio of 99% compared with 103% in July. Days on Market remained about the same at 17. September began with 87 active listings compared to 98 in August. With 17 fewer listings in September, Johns Creek will likely remain another micro-market that holds its value in the coming months. 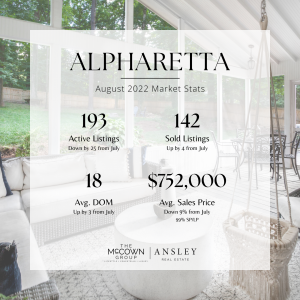 In Alpharetta, which is one of the largest of the Top 7 Suburbs, there was a month-over- month price decrease of 9%, going from $830 thousand in July to $752,000 in August. Days on market went from 15 to 18 and buyers paid about 99% of list price compared to 101% in July for the 142 homes that were sold. There were 193 active listings at the beginning of September which is 25 fewer than August. 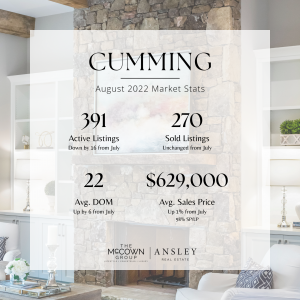 This is honestly great news!! So is it a good time to sell? It depends. All of the market factors combined with personal circumstances render a different answer to each individual household. There is so much to consider! But if you are thinking about selling, it is more imperative than ever that you have a representative who knows the local market and can navigate you through the chaos, advise you on staging, marketing and timing. Smart sellers will price at or below market price and be flexible and ready to pivot quickly depending on buyer response.

If you are ready to buy, give us a call so we can sit down and discuss your particular
situation. Even though Conor Sen with Bloomberg.com recommends buying now, that might
not be what is best for you. But if it is, you need an advocate! We are very much in touch with
the changing market and can save you time, money, and headaches with our proven strategies. And we have a lender that offers free refinancing in the first 3 years of your mortgage and another lender who offers a Buy Before You Sell program as well as a Cash offer program.

If you found this information helpful, please like and subscribe to our channel for future market updates.  If you have a different take on the market or would like to see other communities highlighted, please reach out to us directly at 678-807-9566.

© 2022 All rights reserved, All information herein deemed reliable but not guaranteed.